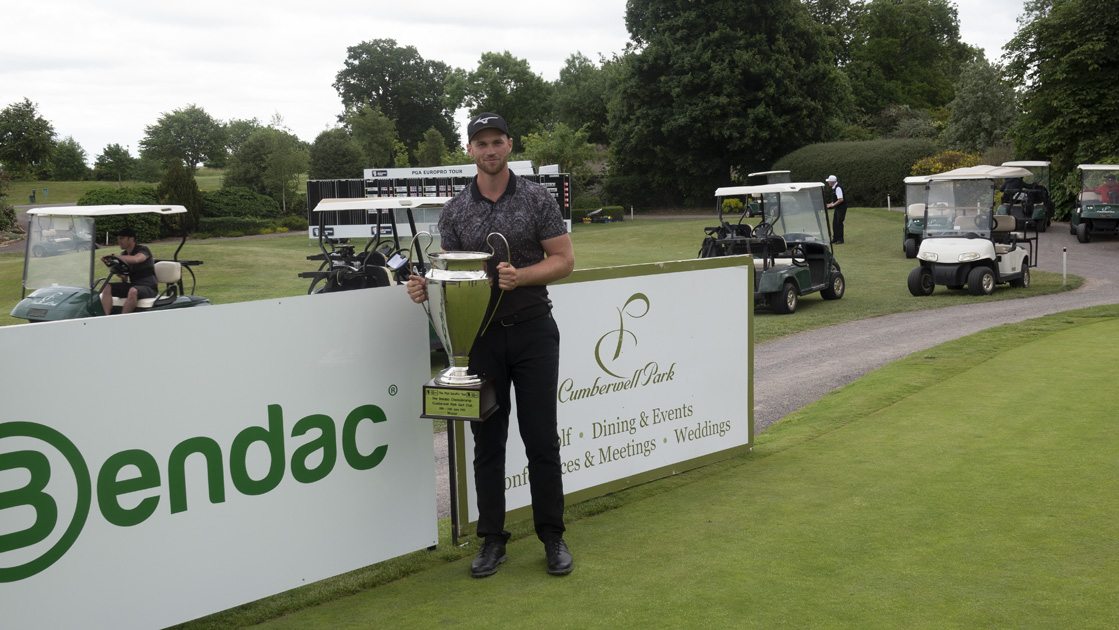 The Bendac Championship culminated after three gruelling play-off holes, where Ryan Brooks was crowned champion on the PGA EuroPro Tour for the very first time.

Cumberwell Park was the scene for the first play-off of the 2022 season, where four participants had concluded regulation play with a score of nine-under.

Jeff Wright, Maxwell Martin, Ryan Brooks and Michael Stewart were the four involved, with both Wright and Martin being eliminated after the first additional hole.

It was a fantastic tournament – as is every EuroPro event – and we learned some important things with the meat of the season on the horizon.

Ryan Brooks came agonisingly close to victory at The World Snooker & Jessie May Championship, which was contested at Donnington Grove Golf Club.

The Tamworth-based golfer finished his week in Newbury with a 4th placed finish, falling a couple strokes short of Nick Cunningham’s winning score.

He took that disappointment to Oxford with him, where a final round of 66 (-7) elevated him to a T6 finish.

It should come as no surprise that Brooks would secure victory in his following event, having been in excellent form for quite some time now.

Whilst he may have missed the cut during the Cubefunder Shootout, results of T18 – 4 – T6 – W suggests he is certainly a favourite for progression this year.

After rounds of 72 (+1) and 68 (-3), Jeff Wright was seven shots away from the overnight leader and he was likely playing for Order of Merit standings.

Fast-forward four hours and the Scotsman featured in a four-man playoff for The Bendac Championship title.

He may not have won the championship, but he demonstrated that deficits don’t mean much during the final day of a tournament. His final round 64 (-7) was the lowest of the week and it resulted in a multi-hour wait in the clubhouse, having teed off almost three hours before the leaders!

Wright’s season kicked off in a frustrating manner, with a finish of T43 his highest of the campaign before last week.

His T2 result from Cumberwell Park should give him all the confidence needed to whip his game back in shape.

The final grouping trio of Maxwell Martin, Bailey Gill and Michael Farrier-Twist was something that we have not seen from them so far this year.

He even had a putt for victory on the 54th hole, which narrowly missed the cup and a play-off ensued.

Last year was his debut season on this tour, and he has already beaten his previous best result of T11.

Farrier-Twist has been involved with this tour since 2014, but his finish of T9 is the best of his career to date. A double-bogey at the 11th hole damaged his hopes of a maiden title, but if we consider the impressiveness of his golf game, we should be hearing his name more this year.

It’s impossible to visit Cumberwell Park and not speak about Steve Surry – who had members of the club following him around enthusiastically.

While he no doubt enjoys the experience of each visit, he failed to replicate the highs of last year.

In 2021, Surry finished T7 in The Cumberwell Park Championship, but he had to settle for a T14 result this season.

Nevertheless, it is highly impressive that he can not only hold his own with our tremendously skilled players, but actually compete against them.

We look forward to seeing how Surry fares next year – can he break the top 20 for the third consecutive year?!

We would like to thank Cumberwell Park for their excellent hospitality and hosting of the event, you are an absolute pleasure to work with.

After a marvellous week in the West Country, our attention diverts to Essex and Abridge Golf Club for The PDC Golf Championship.

This will be the sixth event of the season and there will be a short hiatus after our stint in Essex, with members of the tour being given a deserved week’s rest.