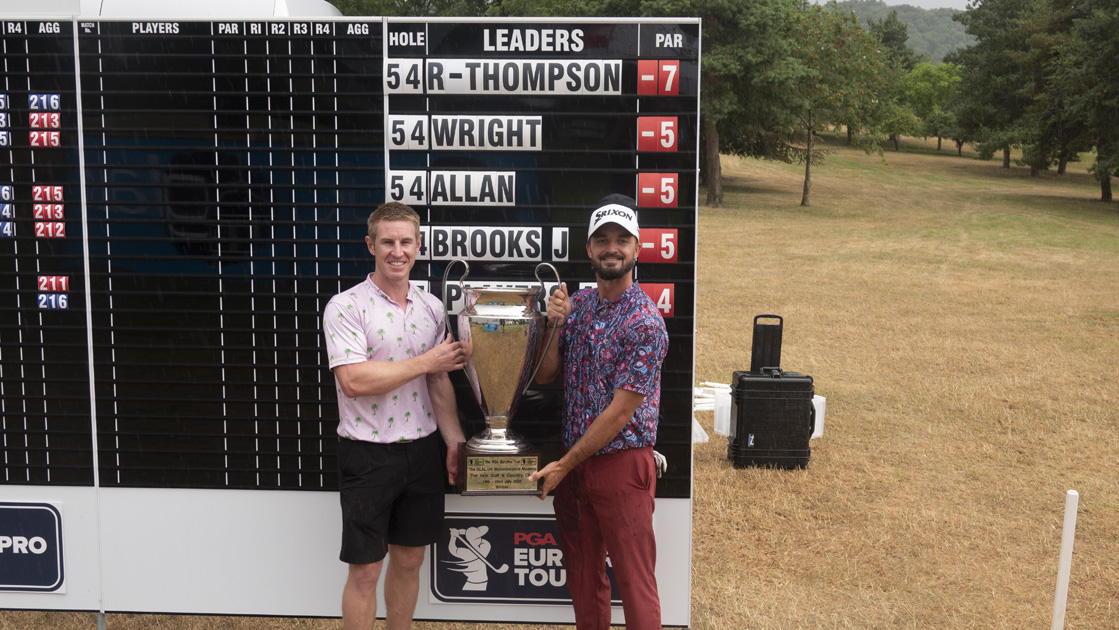 Last week’s tournament joins the very long list of successful and highly-competitive events on the PGA EuroPro Tour this season.

Brandon Robinson-Thompson was crowned champion on this tour for the very first time, and he had been threatening this kind of performance all year.

Before we make the long trip to Slaley Hall Hotel, Spa & Golf Resort, here are five things unearthed from the latest tournament.

Brandon Robinson-Thompson: Keep knocking and it will break

Brandon Robinson-Thompson was another popular winner on the PGA EuroPro Tour this season, and his accumulation of impressive performances finally culminated in ultimate glory.

The 29-year-old has been in scintillating form all season – best summarised by his second-place standing in the Order of Merit – and his maiden win began to feel like an inevitability.

He claimed that he wanted to be the best player on this tour for the 2022 season, and if he can keep up this fine spell of golf, he has every chance of finishing in that coveted top spot following the Tour Championship at the majestic Lough Erne Resort.

Everyone will be fully aware of how difficult winning a golf competition is. With a field as stacked and competitive as a typical EuroPro event, any golfer with ambitions to win will need to produce three peerless rounds of golf.

For Joe Brooks – who has finished within the top 10 on four occasions this year – his victorious moment is surely just around the corner. For the second time this season, Joe Brooks featured in the final group on a Friday

The Hertfordshire-based golfer has many talents, but perhaps his greatest is his versatility; if you can compete on an array of golf courses that require different approaches, you have the ability to compete anywhere in the world.

Keep an eye out for the name Joe Brooks!

Rhys Nevin is enjoying his first year as a PGA EuroPro Tour member, and he also relished in his best finish of the season last week.

Previously, results of T21 and T13 were the highlights of his 2022 campaign, but a riveting performance in Worcestershire resulted in his first top 5 of the year.

Part of Ignis Management, Nevin will look to build on his fine display and bolster his standing of 38th in the Order of Merit.

The Vale Golf & Country Club played host to the 8th event of the season and we could not have asked for a warmer welcome.

In addition to its marvellous and challenging golf course, the establishment’s staff were friendly throughout and the facilities were in perfect condition all week. The International course offered a fine test during the tournament

The club’s irrigation system stopped functioning only a week before the event, and the greenkeeping staff were out watering the greens by hand at 2 am in the lead up – and during – the tournament week.

We would like to thank the club for everything they have done, and we look forward to another successful event for the 2023 season.

Grace Kelly Childhood Cancer were attached to the Pro-Am and through the generosity of those who participated, a lot of money was raised for an exceptionally important cause.

The charity’s aim is to bring attention to childhood cancer and the amount of residents it affects, with nearly 4,000 children and young adults receiving life changing diagnosis every year.

We will be interviewing a spokesperson from the charity, providing insight into all the important work they do and the people that they deeply care for – keep an eye out on our socials for that feature.

The GLAL.UK Worcestershire Masters was a great success, with Robinson-Thompson securing his maiden PGA EuroPro Tour title in the process.

Next up for the tour is a trip to Slaley Hall, where a new trophy is up for grabs!

Make sure you are following us on Instagram or Facebook, where we will be reporting extensively throughout the tournament.