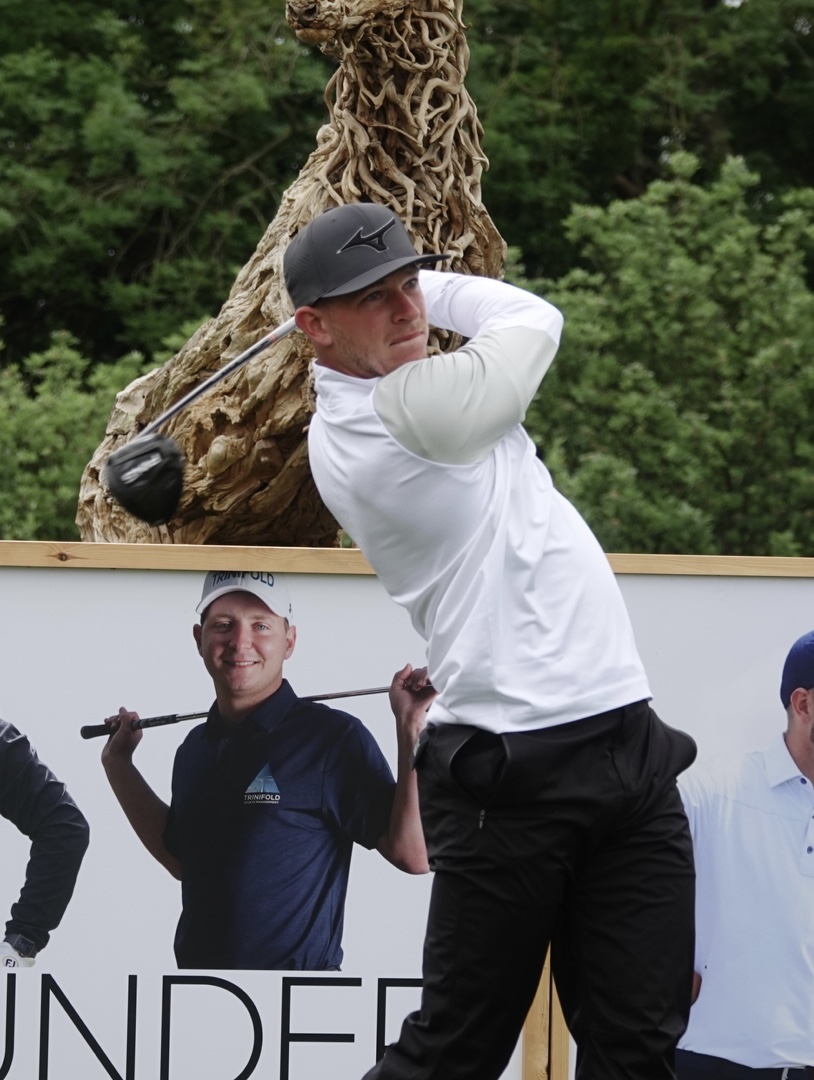 A cloudy and predominantly windy Harleyford Golf Club opened up the 2022 PGA EuroPro Tour season, where Will Enefer resumed his quest for Challenge Tour status.

Enefer, who recently signed with Trinifold Sports Management, started in electrifying fashion, birdieing three of the first five holes as he made the turn in 32 with only one blemish on his card.

That would remain the only dropped shot throughout the entire round, as two further birdies on 10 and 11 ensured he would lead by a sole stroke.

Hot on his heels is Matty Lamb – another Trinifold Sports Management asset – who tried to take advantage of the calmer conditions this morning.

Whilst Enefer had to battle through the worst of the weather, Lamb enjoyed relatively gentle resistance through his opening nine.

It’s quite ironic that he would fail to capitalise on that hefty advantage, as a birdie on the 1st and 9th kept him even-par following bogeys on 4 and 8.

It wasn’t until his back nine, where the wind blew relentlessly and the rain threatened to dampen the party, when Lamb demonstrated why he was selected for the Walker Cup.

A birdie on 10 awakened confidence in the 24-year-old, who would effortlessly reel off four consecutive birdies from 12 to 15.

Three pars from his final three holes ensured he remained at five-under for the day and he even held the outright lead for a while – before Enefer eventually caught him prior to surpassing his total.

When asked about his impressive performance, Lamb admitted that he didn’t have his a-game during the opening half.

“I wasn’t really playing well on the front nine, so I was ecstatic to be level through nine considering how I was playing,” he noted.

“On the back nine I pretty much hit every green, but I still wasn’t striking it great – thankfully the putter started rolling and I saw the lines well.”

Lamb is currently in a tie for second alongside both Dermot McElroy and James Allan, who represents Chelmsford Golf Club.

Allan found three birdies on the front nine before an excellent finish helped bolster his overall standing after dropping a shot on the par-5 10th.

Northern Irishman McElroy dropped just the one shot throughout his round – on the par-4 7th – before four further birdies placed him nicely in contention heading into Thursday’s second round.

There are a further 10 players in T11, with amateur Taylor Paul the surprise of the bunch.

Paul was part of the first group who teed off at 06:30 and the 20-year-old plays his golf out of Harleyford Golf Club – where course knowledge proved invaluable.

He was three-under through five following an eagle on the 5th, but bogeys on 6 and 8 halted his momentum.

That didn’t stop the young player however, as three more birdies placed him at four-under as he stood on the 18th tee.

At this time, he was in the lead, but the amateur failed to get up-and-down from the rough that surrounds the 18th green after a cruel lip out from his par putt.

As a consequence of the one-tee start, the field will be active again from 06:30 Thursday morning and you can catch up with the latest scores on our social media platforms.

Please remember that the final two hours of the tournament will be broadcasted live across selective social media channels on Friday – so tune in to catch the finale live!