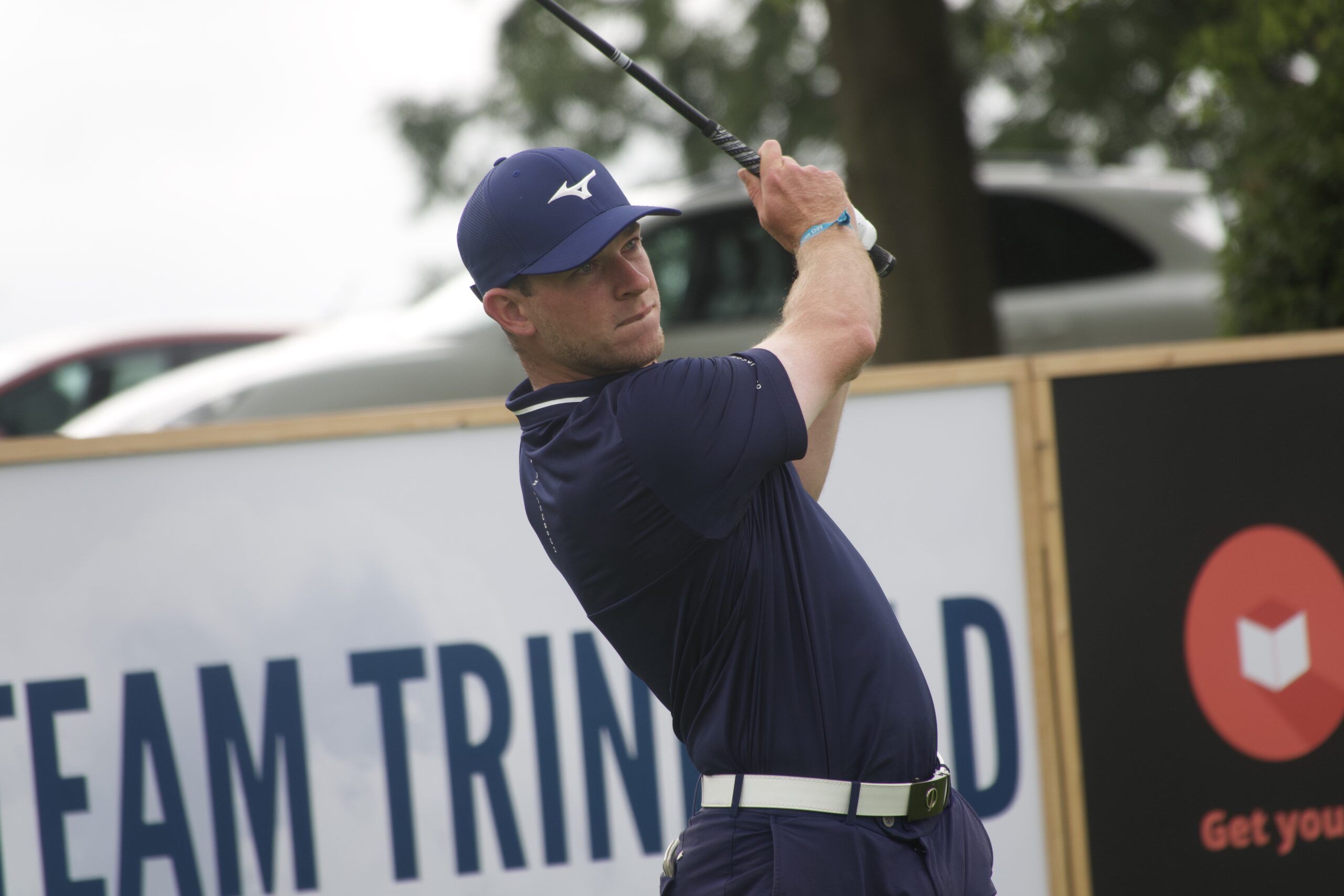 Will Enefer returned to the PGA EuroPro Tour with a bang after posting 65 (-7) for his opening round of the PDC Golf Championship at Abridge Golf Club.

Enefer enjoyed a stint in France competing on the challenge tour last week, finishing T46 at the Open de Bretagne.

Upon his return, the Englishman wasted no time on the scoring front, reeling off five consecutive birdies from 2 to 6 before adding another at 9 to make the turn in 30 (-6).

A steadier back nine by his standards – which featured an eagle and bogey – has pushed Enefer into the outright lead.

He’ll know that the job isn’t done however, as Jack Davidson is breathing down his neck with a 66 of his own.

The Welshman has not missed a single cut this season and it looks like his fine form is starting to peak.

He started on the 10th tee and found an eagle at the par-5 13th, before bolstering his standing with a birdie at 17.

An early bogey into the back nine threatened to derail the round, but four further birdies produced the ultimate response.

Four are positioned T3 currently, with Nick Watson, David Hague, Ben Jones and Nick Marsh concluding their opening round with a score of 67 (-5).

Watson brought an end to a two-cut streak at Cumberwell Park; another strong performance tomorrow will set him up nicely for his best finish of the season.

The Englishman parred the opening three holes before four successive birdies launched him up the leaderboard.

He experienced a steadier back nine, with just the one birdie, but a blemish-free round of golf is always welcomed. Nick Watson will be eager to build on his fantastic start

David Hague will undoubtedly be delighted with his day’s work, but he will be disappointed with a double on the par-4 12th.

Starting from the 10th tee, a birdie on 11 looked likely to set the theme for the day, but two dropped shots at the following hole delayed his early progress.

His mindset can – and should – be applauded, birdieing the very next hole before adding another at 17 to make the turn under par.

Considering he recovered so quickly into his round, he intelligently used the back nine as a chance to attack – resulting in two birdies and an eagle.

Without that double-bogey, Hague would be in the co-lead alongside Enefer.

Nick Marsh, who was one of the final golfers on the course, can be pleased with his afternoon.

The Englishman has been in phenomenal form all season, posting three top 10s in only four events.

In addition to his marvellous stint in EuroPro competition, he has been thriving on the 2020protour and looks set for an unbelievable year.

Kicking off his tournament from the 10th tee, a bogey broke up a run of five birdies, with Marsh making the turn confidently in 32 (-4).

The prevalent scoring opportunities of the front nine failed to present themselves during the latter half, notching just the one birdie to edge him closer to the leader.

It would appear that Ben Jones has returned to form too, having missed consecutive cuts to the surprise of many.

After opening his season with runner-up and T2 finishes, he failed to progress to the final round at both Studley Wood and Cumberwell Park. That brief dip in momentum looks to have vanished however, and he’ll be eager to eat into Enefer’s lead tomorrow.

Jones, who also started from the 10th, found an early birdie at the 11th before giving it back at the par-5 16th – which requires a precise tee shot and plays far more difficult than your standard par-5.

He refused to let the disappointment dominate his round, securing back-to-back birdies at 1 and 2 before adding three more at 4, 5 and 6.

The cutline is currently at one-under, although another day of positive scoring should see that rise narrowly.

Light showers are expected for the second round, but nothing too detrimental for the players to negotiate.

We will see you bright and early for the second round of the PDC Golf Championship tomorrow morning.