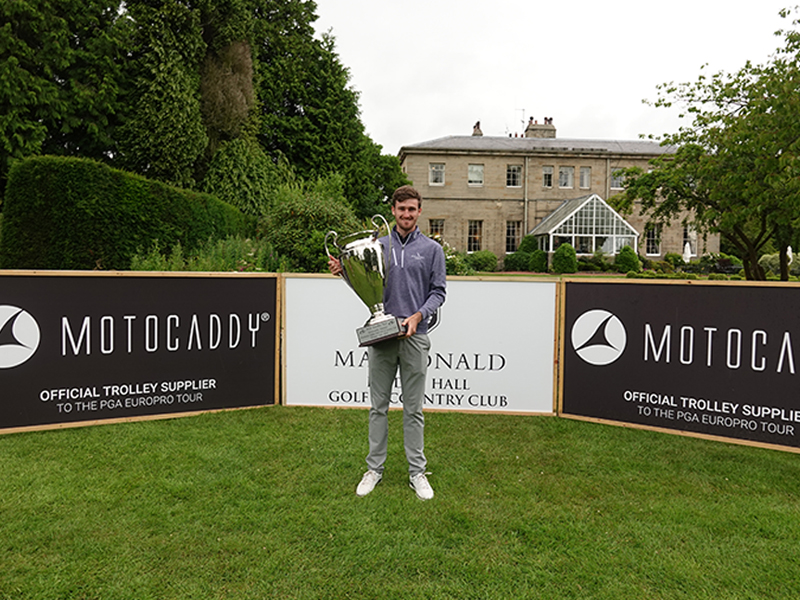 Andrew Wilson has won The Motocaddy Masters days after clinching a place at The 146th Open later this month.

Wilson (Rockliffe Hall) knew a good round would put him in the mix and posted his second 67 of the week to go five under for the day to win by one shot.

It’s some week for Wilson after playing two rounds of enduring Open qualifying on Tuesday in Nottingham. He played his third round of the week at lunchtime on Wednesday in his opening round at Macdonald Linden Hall where he shot five under.

Wilson said: “It was really tough. The entire day was really tough. I was just happy to finish and even better to win. I played here on Sunday for practice then practice round on Monday (Open qualifying), then two rounds on Tuesday plus, regional qualifying then Dudsbury. I don’t know many rounds of golf I’ve had over the last two weeks.”

“I didn’t expect to be up there to be honest. I struggled a bit yesterday. I just sort of held it and my caddy did a really good job.”

He went out in his last round with six birdies and only one bogey to put himself right into contention. Something that seemed unlikely at the start of play.

It wasn’t to be for Richard Mansell (Beau Desert Golf Club) and James Allan (Chelsmford Golf Club) who both ran Wilson close at the end with Mansell finding the water on 18 and Allan going close with a putt to tie for a playoff.

Elsewhere, it was nearly the case of deja vu for Alfie Plant (Sundridge Park Golf Club) who was leading by two shots at one stage on ten under before finishing tied for second.

As part of the Motocaddy Masters, Andrew Wilson won a Motocaddy M3 PRO electric trolley with Lithium battery whilst Alfie Plant and Tim Rice received a  2019 S1 Lithium model and a P1 push trolley on count back.

Fyfe leads by one shot going into last day