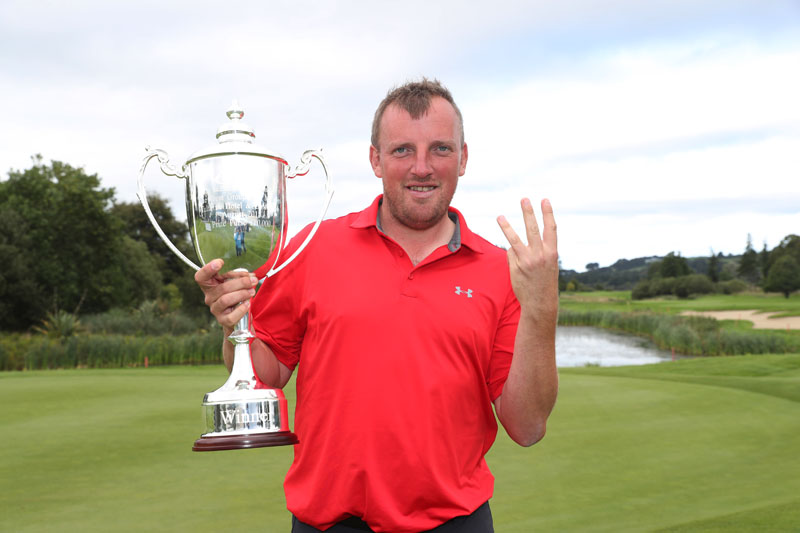 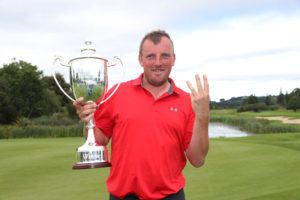 Young (Longridge Golf Club) started the day four shots off the lead and had it all to do on windy final round on the Blessington Lakes.

John Ross Galbraith (Whitehead Golf Club) was on the hunt for his maiden EuroPro Tour title but struggled to put a run together, as did one of his playing partners Marco Penge. Ireland’s Niall Kearney on the other hand looked to be the man to beat going out in 33 to hold a share of the lead with England’s Tomasz Anderson on ten-under par.

Elsewhere, Clevedon’s Ashley Mansell got in on the act and carded a final round of 69 (-3) to hold the early clubhouse lead on nine-under par, setting the bar for the other four golfers in contention still out on the course.

At the turn it looked to be Anderson’s tournament to lose as he reached 11-under par heading down the 18th, and had a two-shot cushion over clubhouse leaders Young and Mansell whilst Kearney was a hole and shot back.

Drama struck late on as Anderson found himself in a fairway bunker over 190 yards from the pin, and in going for the green struck his approach way left and flush to a clubhouse wall. Forced to play his shot left handed, he struck his shot through the green and into a bunker and could only get up and down for a double bogey, joining Young and Mansell in clubhouse on nine-under par.

Kearney, requiring at worst a par to win on home soil, could only find the green side bunker on the 18th. His chip and putt left him with a two-foot putt to join the other clubhouse leaders but a lip out, much to the disdain of the home crowd and Kearney alike, meant he had to settle for a share of fourth with Scotland’s Paul McKechnie and Northern Ireland’s Galbraith.

An all-English playoff involving Young, Anderson, and Mansell only lasted one hole as Mansell and Anderson could only manage to bogey the 18thwhereas Young rolled in a two-foot par putt for his third win of the season.

Reflecting on his win he said: “It was an unexpecting win if I’m honest, knowing where I was with two to play I thought I was going to be a couple short so, to get into the playoff was a bonus to start with.

“I hit two good shots [in the playoff] whereas the other two weren’t as fortunate, I took advantage of that and I’m delighted to get the win.

“I was playing with Anderson and he was unfortunate to land where he did after his bunker shot at the end, but pressure is an amazing thing at times.” 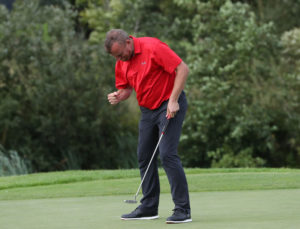 The win sees Young leapfrog the in-form Dave Coupland in the Race To Desert Springs back into the top spot, confirming his spot in the Challenge Tour next season, and also brings him to within one win of the coveted £250,000 four-win bonus. He said: “It sounds great, we’ll see what happens. It’s very difficult to win golf tournaments on this tour and I’ve been fortunate to win three, but I’m in a position where it is possible now to win the bonus.

“It would be massive to win the bonus, it would set me up for playing at the higher levels for many years, but I’ve not got there yet.”

Jim Murphy, CEO of PREM Group, said: “Congratulations to Mark on what was a fantastic win. There was some really high-class golf played out on the course over the last three days and to emerge victorious from such a competitive field following a thrilling playoff is very impressive. We are delighted to have hosted such a large number of top-class golfers at Tulfarris Hotel & Golf Resort, and I have no doubt that we will see many of them competing at the very highest level of world golf in the coming years.

“We got great feedback from many of the players who were highly complementary of the course, and, having played it during the Pro-Am event on Tuesday, I can only praise the brilliant staff here at Tulfarris Hotel & Golf Resort for having it in such pristine condition.”