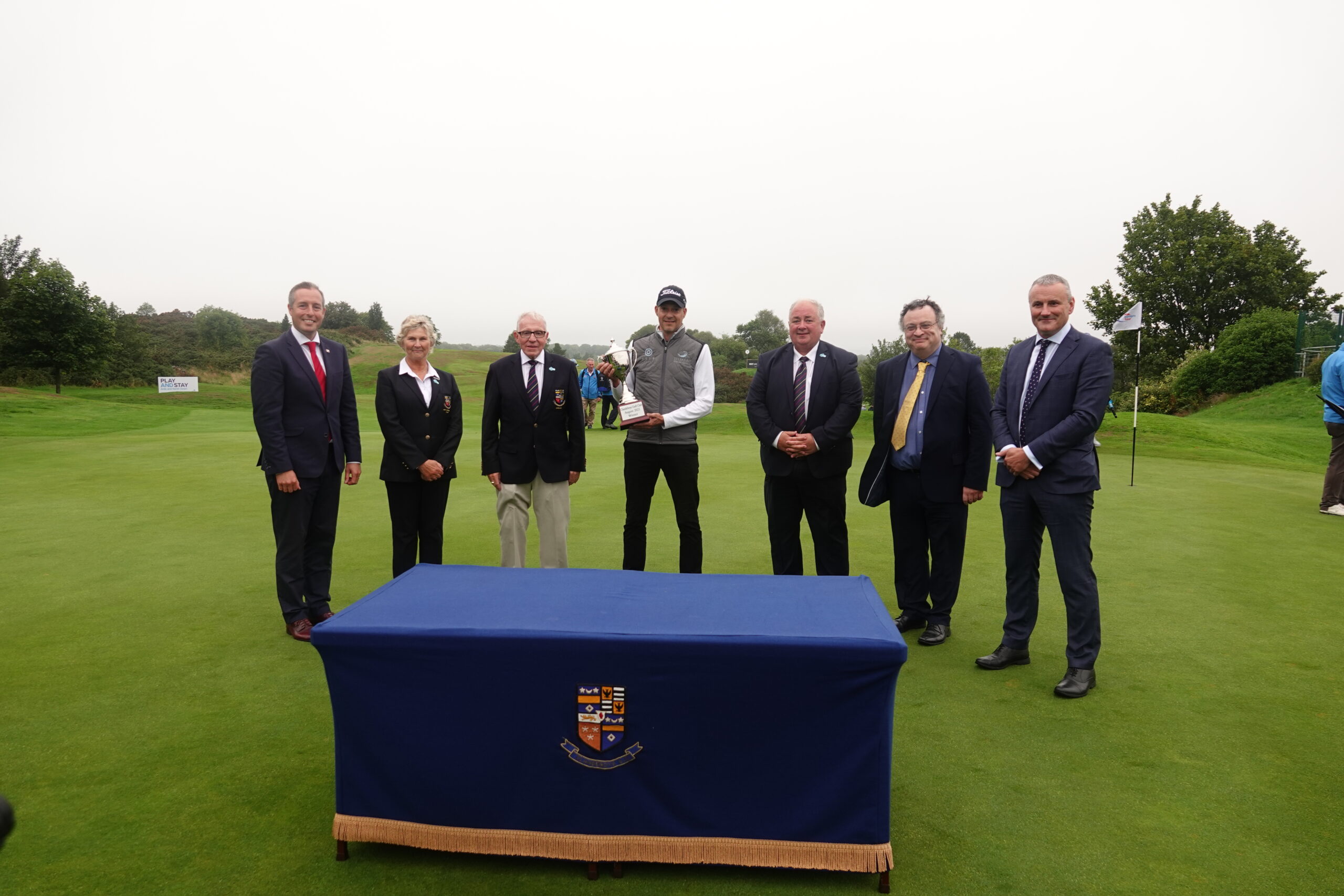 Supported by Ards and North Down Borough Council, Tourism NI, Sport NI, and the N.I Executive.

Thornton (Tulfarris Hotel Golf Resort) began the day, one shy of the lead and put pay to the rest of the field to secure victory with a final round of -4 for a week of 60, 72, and 67.

In truth, Thornton’s efforts were deserving of a fitting victory, the bogey-free 60 was breathtaking on day one. Yesterday’s round to be +1 despite a double bogey on the first hole left him in a strong position for the final day.

He was bogey-free in a tricky final day where a thick fog kept play postponed until 2 pm when initially the first group was due out at 8 am. The shotgun start meant it was all go at once. Thornton’s experience at the top end of golf came into use with birdies at 6, 13, 15, and 17.

Thornton said: “When you shoot 60 on the first day everybody expects you to win but really yesterday was a great round of golf, one over par and I am still thinking is it still true (the 60) to stay in the mix. Then it came today and I have to say the weather suited me. Hitting those little punch shots in. I’m delighted.”

“Everybody in this country loves golf. We all love golf. So many golf courses and so much passion for the game. So to have so many come and watch and to watch Jonathan (Caldwell) is just fantastic)”

Overnight leader Joe Brooks struggled to get going on the last day after an early birdie at six with back-to-back bogies to find himself one back from the lead at the turn. Brooks of Hanbury Manor was fighting on the back nine but it wasn’t to be finishing fourth.

Mitch Waite was two back at the start of play but birdies at 4, 5, and 6 midway through the front nine meant the Filton Golfer had hit the top of the leaderboard.

Waite dropped a shot at 8 though which was the beginning of the end for his day settling for third after a birdie on 18 at level par final round.

David Langley took the fight to the field with a round of the day for six under. Langley of Trinifold Sports ended up taking second in his own, the round included holing out from 70 yards for an eagle on 6. Two further eagles followed meaning he was in the clubhouse one short of the lead with Thornton at the 17th.

Ben Amor (Marlborough Golf Club) marked his best finish to date with a final round 70 (-1) where he shared fifth with Dongwon Kim (X-ordinary Management) who put down a 68 for three under.

Ireland’s Stuart Grehan also had his best finish of the season to take solo seventh after a final round of level par.

The top ten was rounded out by James Allan (Chelmsford Golf Club), Callum Farr (Trinifold Sports), and Jamie Dick (AT Golf Coaching) all at five under.

The Tour would like to take the chance to thank the club and key stakeholders for all the support over not only the last week but the last two years that have gone into planning this event.

A week off for the tour before we head to Studley Wood Golf Club from Wednesday 1, September to Friday 3, September.

Highlights from The Northern Ireland Masters supported by Jonathan Caldwell at Clandeboye Golf Club will air on Sky Sports Golf on Tuesday 31, August at 6pm with several other showings scheduled.